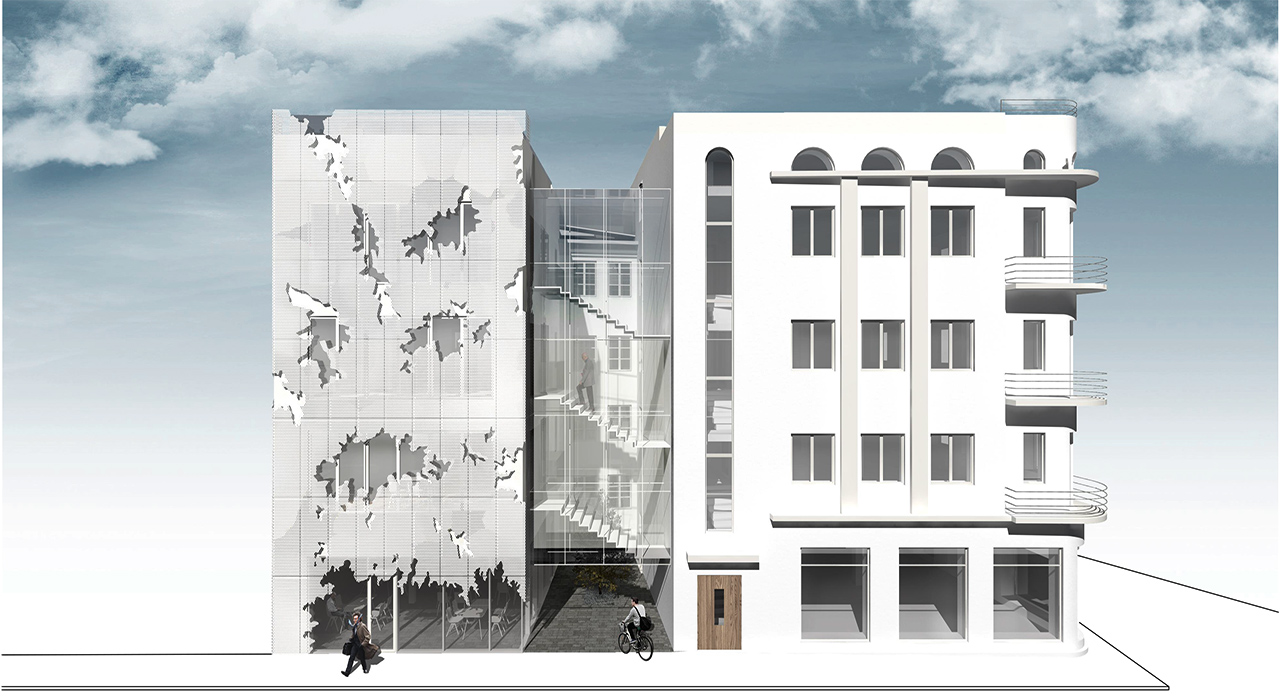 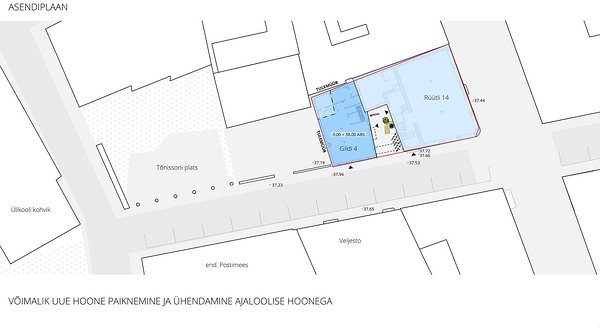 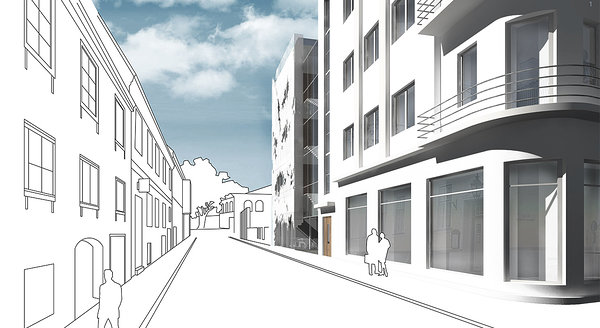 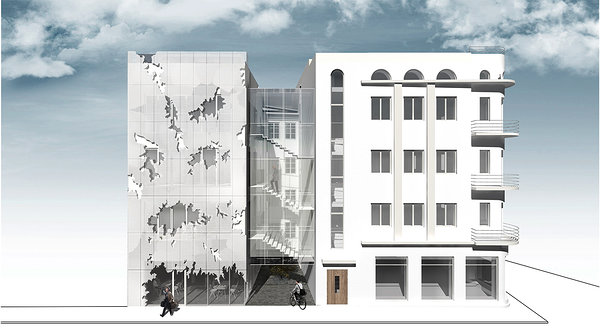 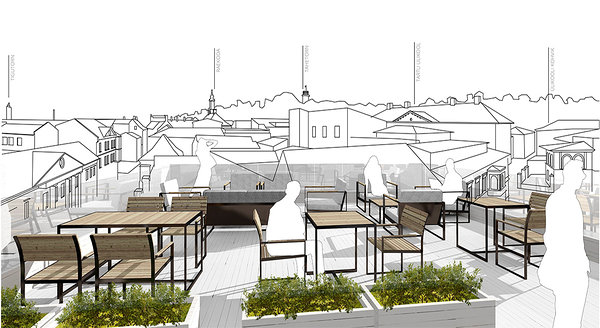 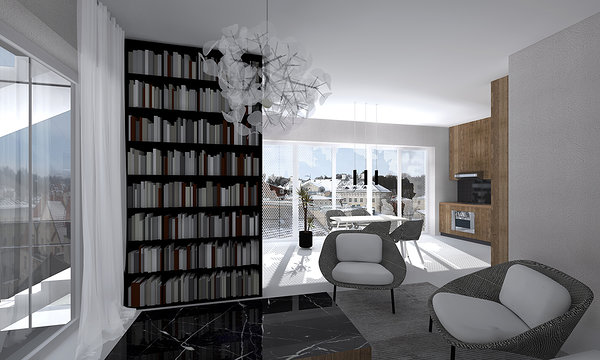 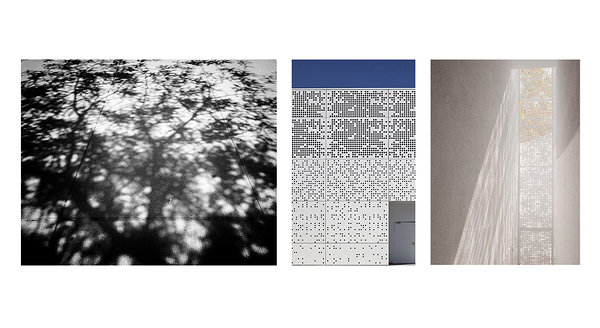 
We won the Gildi 4/Rüütli 14 architectural competition, so you can expect a new building in Tartu’s Old Town!

The aim of the competition was to design a new building to complement the architectural monument at Rüütli 14. The idea with "Varjund" was to create architecture that speaks about the Old Town, to support activating life in the city centre with a roof terrace that is open to everyone and to design comfortable rental apartments. The new building is integrated with the Rüütli 14 building: the two form one functional unit.

Data concerning the typically colourful history of this Old Town plot date back to 1811. Several earlier constructions were followed by Oskar Luik's initiative to build a toy factory and store building with apartments in 1934 based on Karl Kroon's designs. In fact, the new building was erected on the walls of a building constructed in 1879. Due to long breaks in the construction, Karl Kroon gave up managing the site and the work was completed to altered designs by city architect Arnold Matteus.

Oskar Luik became widely known in 1910 when he opened a store selling toys and writing materials on Aleksandri Street in Tartu, and later his workshop, binder’s and box factory on Turu Street. The first known Estonian toy factory was Luik's toy and beauty product factory in Tartu, which began operating in 1916. In the 1920s and 1930s it was one of the leading toy factories in the republic. Its range comprised mainly wooden toys and games, but also dolls. In 1940 the company was nationalised and named Mäng ja Kool (Game and School). In 1941 Luik was deported to Siberia with his wife, mother and sons. Mäng ja Kool continued to operate on the site until the end of the 1990s.

The concept of "Varjund" was to avoid a recognisable building type (apartment building, commercial premises, etc.) and to use architectural elements to underscore and amplify the Old Town phenomenon. It focuses on the mysterious, the rambling, the hidden, light and shadow and sounds, but also a sense of security. (“Varjund" in Estonian means protection, shade, dwelling, an image on the ground when a light hits an object.)

If being suited to a context tends first to be evaluated by the shape of a building, its windows, doors, decor, colour, etc., then at a deeper level there is interaction with a more refined and abstract meaning. Due to construction being divided into geographical quarters, the Old Town features courtyards. The view from the inside of the building to the courtyard is quite different to its view towards the street. Courtyards often reveal a totally different character than may seem to be the case from the street. The small windows in the thick walls of the old buildings give meaning to safety and security, among other things. Due to dense construction, the Old Town often has contrasting light conditions: some facades are fully in the sunlight for a short period of time and then in shade, or open to reflections from surrounding surfaces. The sounds of the city are a part of life in the Old Town - an opportunity, often an inevitability, to be one with the surrounding buzz.

The characteristic element of the building is the double facade facing onto the street. The perforated pattern on the shade surface creates a level of detail that is equal to the historic environment, yet also mysterious and subtle. The perforation is so sparse that it allows good lighting conditions via the large windows, but cuts the indoor space out of the field of vision of the buildings across the street. As seen from the interior, the perforation acts as a protective curtain and allows you to observe and experience what is happening on the street without being seen. The pattern cut into the perforation, with its organic geographical motif, forms a link with the international university town. The building's exterior finishing is rendered white in tone throughout to allow for the play of light and the shadows.

On the first floor of the extension is a commercial space, while the three floors above it have two apartments each. The existing architectural monument has been used to the maximum extent with minimal modifications. The apartments are designed so that the kitchen and dining area face onto the street and the living room overlooks the courtyard. The large inward-opening windows of the street-facing apartments can be opened to let in the sounds of the Old Town, and closed for privacy and seclusion. The bedrooms are hidden from the hubbub of the city, facing onto the courtyard.

The greatest asset of Gildi 4 as a commercial space, setting it apart from other sites in the Old Town, is the fact that it offers clients great views from the rooftop terrace. Unique views of Annelinn, Tigutorn, Toomemäe and of course the Old Town itself with all of its landmarks can be seen from the top of the building.